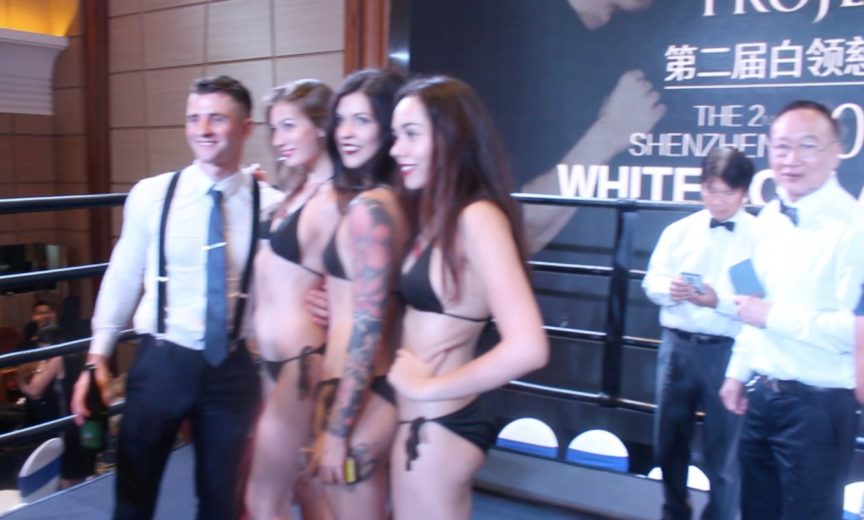 Everyone has a plan until they get punched in the face – Mike Tyson.

What an action packed Saturday night. Not my normal “personal video blog” – more like a reporter or sports commentator for a ringside fight night. Here in Shenzhen, this was the second White Collar Fight Night – the last one was in Shekou’s Hilton last December. This time over in Futian at the Phoenix – a massive restaurant / club house.

The doors opened at 6:30pm and the way it worked was sponsored / group tables. Prices of tables varied depending on how close to the ring your table is. The table included dinner and drinks (bottles of vodka, wine, champagne, the whole 9).

There were I believe 7 fights over the course of the night, a mix of men and women, and different weight / size classes. We followed the story of a couple fighters – as it is so hard to cover all of the fights in a single video blog.

One of the fighters we focused on was Curtin, who had his first boxing experience and trained for a couple months before while also having business trips in between. We got him before, during, and after the fight in the video. He won his match, the referee insisted that his opponent get out earlier because he wanted him to avoid further injury. Curtin also got a couple hits to the nose and a bit of a bloody nose there (caught a bit on video).

About halfway through the fights, we broke for dinner. During dinner auctions took place, and everything from paintings to luxury apartment passes were put up for bidding.

Another fighter we focused in on was Chase, representing Abnet. He is 49 years old and was up with a young and popular local contender Freddy. They went all 3 rounds and both were exhausted by the end. It was a bit even emotional for me to watch – they got so tired and you could hear shouting and cheering for both contenders. Chase came through and won by the judges vote.

The fighting continued until about 11pm, and then time for plenty of photo ops. I got to hop up in the ring and catch some video action with the founder and organizer, John Graham. He is so excited about this and already planning the next fight night in December. There are big plans for this over the long term and I am excited to be part of it early on.

See you at the next White Collar Fight Night in Shenzhen? This December?

Also check out Shekou Daily’s great post of the fighters.

Bro Night (A Match Made By Our Families)

Using an Event as an EXCUSE to Change