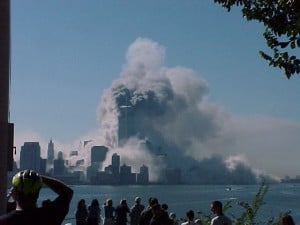 seeing various tweets (messages on twitter) reminding me about the days of September 11 – and I thought I would take some time to share what I saw and experienced and felt that day.

I was a junior in university at Stevens Tech, in hoboken, new jersey – which is right on the Hudson River overlooking the
manhattan skyline which at that time had the twin towers of the World trade center.

It was a tuesday, and I had my first class at 11am, so I liked to
wake up that day around 8am, shower and get a good breakfast in before going to class. Coming out of the shower, walking down the hallway of the dorm – I looked out the windows of the other students rooms – to see smoke coming out of the side of one of the world trade center towers. Also, one classmate had CNN on, also showing live footage of the trade center fire from almost the exact angle from our window – so it was a strange site, to see the TV and the window showing the exact same image, live….

But the TV said it was a SMALL plane who had mistakenly gotten into the no-fly zone and crashed into the tower.

So I thought it must have been some student pilot, or something stupid that I could check into later. I went up to the cafeteria – which was also higher on the point and a better view of the NY skyline.

Getting my eggs from the grill, I heard someone scream from the window that a tower was collapsing – I was in the inner kitchen, so I ran towards the window to see the tower tipping over and rumbling down to the ground…..

the cafeteria manager freaked out, having tons of students
crowding around his windows – he closed the blinds screaming that his cafeteria will not be a theatre of this disaster. So we all ran out of the building and onto Castle Point to see closer….

Campus police were circling aruond on bikes, golf carts, on foot telling people to stay calm and go about your normal business.

But at the same time, people were screaming that the pentagon got hit, and there were something like 20 other planes in the air hijacked by terrorists and hitting every major city in the United States. That the white house was coming next, and other major landmarks and buildings everywhere.

Most stayed on castle point – the most direct and clear view of
the World Trade center towers in Manhattan – and seeing the
rubble and smoke coming from the first, with the second tower on fire but still standing.

We were confident the 2nd tower would hold itself up, and I had said we would keep the other tower up….but just as I had said that…..it systematically floor by floor exploded and collapsed…..tumbling down to the ground…..

Both towers were gone….the downtown manhattan skyline was all smoke…..

Students were freaking out……

Then campus police told us to move our cars from parking lots and athetic fields (were currently using the field as a backup
parking lot) and to move them – as our field and parking lot
would act as an emergency helipad for survivors from the
wreckage.

As we left Castle point, we all felt there were 20 or so planes
hijacked in the air, maybe going to hit the Empire state building
next, or parts of new jersey……

My friend bobby had a truck and his home was upstate, so he and I ran for his car and tried to leave the parking lot to head to his home up in the farmlands…..but it was pure gridlock…..every street, bumper to bumper…..horns honking, intersections completely jammed.

I tried to call my parents, my friends back home – but there was no cell phone service as the World trade center was also the cell phone tower for the city and areas around it…..no one could call.

Then Bobby and I parked his truck back…and we went to our
fraternity house to watch the big screen tv in the common room with the other brothers….

No one knew what would happen next…..were we all going to blow up? was it just planes in the air, or would there be terrorists on foot, or in cars, trucks, buses? How far was it going to go.

We saw on TV the pentagon on fire……we saw the ashes and the smoke coming from where the World trade towers had once been….some of our fraternity brothers and classmates had internships in the world trade center – the craziest story was that Monte and Julien were interning at Lehman in the WTC, but had gotten drunk the night before and woke up late….Monte was on the PATH (subway) and maybe 2 stops away when the tower collapsed so they stopped the subway and he never got into the towers. Another
girl from the university, Mary Farley, was actually in the towers, but was low enough to take the stairs out and escaped safely..

Days following, classes were still in session, but boats were
coming back and forth between Manhattan, NY across the Hudson river into our city, Hoboken, NJ to bring the dead bodies out….

Every TV station was covering it….I remember my friends coming to my dorm room, and I was talking about doing my homework….and one said what is the point now…..whats the purpose of working so hard when you can blow up like that. What is the meaning of life. It was some really strange topics.

There was a CEO on CNN tv crying his eyes out, that EVERY SINGLE worker in his company died in the tower, and he was not in the office at that time, but he was the only one who survived (I believe the company was Cantor Fitzgerald) ….and that he was paying as much money as he could to the family of those deceased employees.

I think that September 11 event changed my life forever…it made me realize how quickly we can just die, so unexpectedly…and we have to live our life for today.

I had nightmares after that – one I still think about is living in New York (the dream took place in the future) and I was sleeping in my manhattan apartment on a weekday morning. And I smelled smoke…and heard burning noises – so I got out of bed and looked out the window – there were terrorists burning down all the buildings on the street of New york – for as far as I could see- and as the tenants of the apartments ran out of their building, a terrorist was hiding on the side of the doorway shooting each one as they came outside….and again people were jumping from their windows (like what we saw on 9/11)…

Further in this dream – I remember escaping out the back window of my apartment, and rushing to the subway underground…entering the subway I saw piles of dead bodies…as the trains entered the station – terrorists would use machine guns and shoot all the customers on the train….so I made a noise and those terrorists waiting for the next train looked upstairs…I had to hide…so I acted dead and laid with the dead bodies…..I found a gun dropped down on the subway floor….picked it up and ran above ground shooting as I came up….I remember getting shot at while shooting and I believe I died or was almost killed and then I woke up…..

But yes, that horrible, terrifying day has affected me – made me realize how we have to live for today – how we cannot be afraid to die, and how safe we really aren’t….no matter what people tell me, I feel terror will always be a threat…..

WE CANNOT LIVE IN FEAR!