FINALLY got to watch the facebook movie “The Social Network”, and wow, it is AMAZING, really has not much to do with the actual making of the technology and marketing of facebook, but does bring home the struggles and problems in doing business with friends, and not having clearly defined roles and exit strategies for partners.

I’m not gonna ruin the movie by going through it all, but I will take some takeaways from what I got out of it:

Mark being a “punk” – the movie shows that Mark Zuckerburg was more of an outcast at school, while a gifted computer genius who was offered to be bought out by Microsoft before even starting at Harvard in the first place. Many mentions of him not being accepted into certain clubs seemed to make him jealous of other students.

location matters – As much as the internet and technology is advancing things, with online project management, chats, voice calls, NOTHING BEATS FACE TO FACE business work and negotiations. Facebook starts at Harvard (which is in the northeast USA, in Boston) but as it grows, it finds it needs to move to Silicon Valley where all the other dot com startups are. They go on to say that the networking, meeting like minded people who are in the industry and can grow off of, and support one another.
billion not million – MONETIZATION OF THE BUSINESS. Again, this strikes me home, because so many people pressure you to monetize a new project so quickly, yet many of the biggest companies don’t have revenue models into well into the development. Here Mark’s business partners want to quickly put up advertisements on thefacebook.com (before it was this) to pay back some of their investment, but Mark said that would make it more tacky and had to develop and evolve more before having advertisements all over it. One thinks of google this way, it was a simple homepage, without ads or annoying pop ups. Google also didn’t make any revenue until there was the Adwords model placing advertisements next to the search results.

programmer in center…. – Many times people say you don’t need to be a programmer in order to develop a great internet business…and can hire others to do it….but the more I notice it, the more I see programmers and technical people being the owners and founders of these massive internet companies. Mark programmed it himself.
rich prestigious people – in the movie, its funny when there are the legal negotiations, and the Winklevoss brothers say they stole their idea, and Mark replies something like – you are just upset because the story didn’t end up like it normally is supposed to. This is something implying his jealousy of the “fraternity” style clubs he didn’t get invited into while at Harvard. 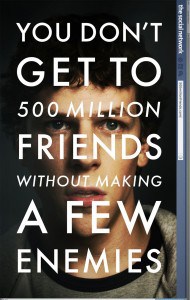 idea stealing – this is always a hot topic. Many people are so afraid to tell others their ideas. It is nerve racking…I guess this is why its best if the programmer is either a founder or an idea guy…..as if you cannot make what you think up, then you do have a problem. This makes me think of the issue of China / Asia manufacturing….you have to trust a factory that they will not steal your idea….and with everything overseas, American entrepreneurs must send their ideas directly overseas and hope not to be copied….a real problem if you ask me.

you gotta be in it 100%….- another original founder, Eduardo, feels left out because he wants to intern in an advertising agency in New York. He isn’t able to / isn’t willing to, dedicate 100% of his time for the facebook startup….and is left out. Again, this is why its hard to do business with friends, as time goes on, people go in their own directions…..

But really great story, amazing to see the insides of how it got started. But we do have to keep in mind, just like getting in the NBA, not every gifted programmer will startup a facebook, google, or microsoft. But we can at least try, and dream.

Grab the movie now for yourself!

PRM.PeopleBrowsr – A tactical tool to manage your personal relationships online