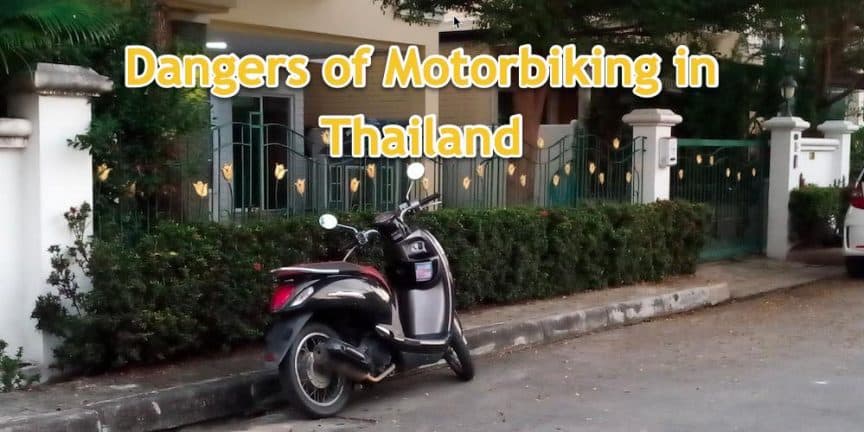 There are stats like Thailand has the highest amount of automotive accidents in the world. Living here a bit over 6 months I can understand why!

In the six months I have already been here, I have had people close to me have 3 accidents, one of them being a death, and I thought I would document them here and reflect on it. Also makes you realize how delicate human beings are – life is fragile!

I’ll put the stories in order that they happened. I will not put names in it, but may update it if they are OK with me naming them.

This American friend has been here for quite a few years, and I had just spent some time with him at a meetup on the same day as his accident. About 8pm or so on a Saturday night, he was coming off the highway and on a bend in the road. He says he ran over some loose sand and simply “the bike got out from under him” and slid off the highway into the grass.

I think the bike came down on one of his legs – as it tore his ACL and he was in the hospital. The crazy part is he didn’t go to the hospital right away. He says he doesn’t remember how he got home but some locals helped him and then he was at his house. Realizing his pain and potential severity, he went in to the ER and they said he had a torn ACL and other injuries that would need surgery.

The big bummer is his family was visiting from US and they had a Southeast Asia trip planned together – that obviously he would not be able to join any longer. Visited him in the hospital and he was taking it well but pretty bummed about the situation.

My Maid’s Son Died On a Motorbike Accident

This story was insane. Those following the blog may have noticed I went through a lot of maids here in Thailand – for various reasons (moving houses, etc). The maid we found we really liked and was amazing with the kids. It was a weekday morning, maybe 10am, and I was on a business phone call in my home office. She came up to me in tears and said she had to leave urgently – that her son had been missing since the night before and the last time someone heard from him he went out on a motorbike with his friend that evening. She was worried and everyone thought it was a bike accident.

Turned out to be the case.

Later that day they found the 2 bodies off the side of the highway dead.

She was broken, went to mourn with her family and deal with funeral and other matters. She showed me photos of Line calls with her son on one side of the call and the maid and my 2 kids on the other. Seems they would often call her son together and make emoticons and AR features together to play and have fun.

Her son was in his teens or 20s I believe.

She tried to return to work with us, but after a few days her mother broke down more about losing her grandson and so the maid returned to be with her family. She did introduce us to a new maid, which is with us still to this day. Not as energetic and playful with the kids as her, but reliable and trustworthy.

This story is what sparked my energy to write this blog post. Our photographer in the ecommerce incubator – his mother got in a bike accident on a Thursday evening. He sent me a message on Line at 10pm that he was in the hospital with her and they were waiting for an operating room.

What also got to me was he said they didn’t have a room for her after the surgery and he was with her all night in the hallway. He was upset because he felt she drove a bit reckless – the way the crash happened was it was a red light and she wanted to move up through the break down lane. Problem was another motorbike also wanted to move up and came from another lane and a car length ahead of her (going between 2 cars to get to the break down lane). Neither biker saw each other and at less then a car length apart the collided.

Didn’t seem to be major injuries but a broken leg for his mom, not sure about the other drive.

Other Stories I have Heard

I have heard of foreigners in Thailand dying on motorbikes. Some that are pretty active in the community from what people have said.

Others say if you have a motorbike, you are almost guaranteed to have some kind of an accident.

Why Does This Happen?

So reading those stories you may wonder why does this happen in the first place? I’ll try to write out some reasons why.

Not much pubic transportation

There isn’t much in the form of shared transportation. Sure there is Grab taxi – but that isn’t affordable long term for the locals. Even me and other foreigners – it does just get a bit annoying to always need to call a car and pay a little bit of cash here and there.

There aren’t any subways. Buses, I have seen but not too familiar with and the roads and highways are so dispersed people live all over the place – it isn’t centrally located (outside of Maya mall area).

So it is a lot of highway driving from going to business to home or between friends homes, grocery stores, etc.

So most people opt to get a motorbike, cheap, easy, and can get you from door to door.

As I look for used and new cars – they are not cheap. I think it is treated as a luxury and probably highly taxed when imported into Thailand.

Even used cars are not too cheap. They hold their value longer as the demand is high.

Riding – It Is Kinda fun!

Come on – it is kind of cool to ride a motorbike! That energy, that freedom to go where ever you want on the open road.

Don’t Think I Will Get a Motorbike, How About You?

For me- I am sticking with Grab taxi app or potentially (seems most likely) getting a used car in Thailand. Sure, it will cost more – but I would rather do that then break legs or even die.

Also, I am not a fan of operating motor vehicles – from bikes to cars to boats – I’d rather be a passenger. Grab drivers recognize me because I jump in the car with a laptop open and phone hotspot on using the car as my office. I don’t enjoy the time between places, rather I try to enjoy the time being at the place!

Wonder what you think of all this motorbike… Shall we say… Danger!? Let me know!

Merry Christmas from Thailand in 2018!

Sharing How I Wrote My First Book (Plus Free Template)

My Chinese Sister is Coming to America

Call From Mom, For Any Day or Mothers Day