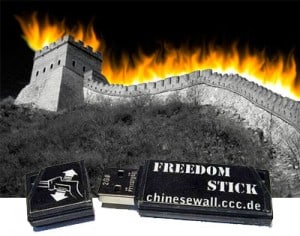 Been back in China a little over a day now….catching up with jetlag and all this travel. California really wore me out…up and down the coast of Southern Cali.

But really….it feels good to be back in China, seeing friends and businesses. Shenzhen is a cool city, I do see opportunity here….but really, I just can’t get past this problem of internet censorship.

For those of you who don’t know (seems on twitter people were asking me too) the websites that are blocked in China include:

And tons others….whatever the Chinese government feels threaten to harm the minds of its Chinese population – essentially those websites they cannot call on the phone and have delete / moderate user content. This is what the GFW is, Great firewall, is. Within internet connections in mainland china, the government forces internet providers to block certain websites.

Its not like people can’t get around it, DUH!!!! ….there are VPNs, and other services…but jeez, its another sloppy (I hate installing all this crap on my PC) workaround. And then when I’m doing online banking…its all crazy because i’m jumping in and out of IP ranges in China, USA, Europe…..seem like some crazy hacker (well, maybe I am, haha). some Chinese people tell me the government doesn’t care about using VPNs, because that is normally for more advanced people anyway, and this blocking / filtering stops the majority of people.

So many of my friends here within the Chinese GFW workaround it. Its sad, and embarrassing to my Chinese friends here, they say at least I can escape it…they are “stuck here” they tell me, being a Chinese citizen. They wish they could turn it off…they don’t want to see people like me leaving the country due to this stupid government filtering.

And then I can’t just jump onto an internet connection at a cafe and use twitter or facebook…I have to get back on my connection on my laptop and do it.

Then there was the news – would google china leave China? I was doing somewhat OK in China before this….but its like a punch in the gut. Google China was one of the last major foreign internet companies in China. Yahoo China is technically Alibaba (share swap), and others don’t have offices with the boundaries of China.

Then it had me thinking, would I follow Google China and leave too? I was thinking maybe Thailand would be the place for me.

Yet I was getting some good movements speaking at Chinese internet events….and sometimes lecturing at the ecommerce university in Shenzhen. Everyone is always so tempted by the huge and growing Chinese market…to sell in China seems so sexy…..but it really does have to be treated completely indepently from English / American business….the way the 2 markets work are so opposite.

So all of 2010 I have been deciding what to do….really if it weren’t for this GFW (great firewall) in China, staying in China would be an easier decision for me. But there is also the political risk between Obama news and currency risk of US dollar dropping against the chinese yuan.

So seems Philippines makes the most sense…and the people there love the internet…I spend a lot of my twitter time chatting to friends in the Philippines….and English language is everwhere there.

Just hard still to giveup China…..I’ll be here at least till the end of November to renew my visa and take care of other business.