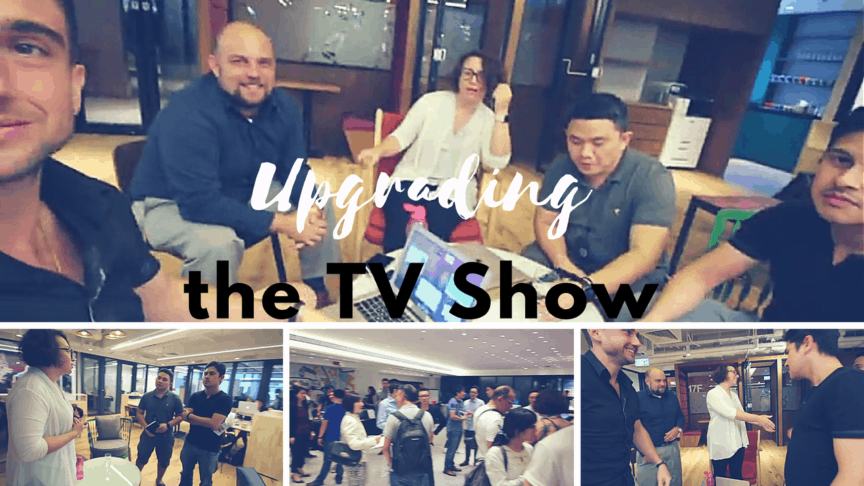 Getting Out There And Making The TV Show Happen

Well, we just released the first episode of Ecommerce Gladiator! The production time for this was of epic proportions – what I thought would take a week turned into over 2 weeks of regular coordination. Big shout out to my friends and the talented Shadowfactory.io for working so hard and doing such amazing work getting it all together.
So as they were making this pilot episode, they saw the potential in it being a real TV show. They work with a lot of studios in Hollywood and Hawaii – and see that the Ecommerce Gladiator show could really branch off to a reality tv show and other spin offs.
Talking to them on Thursday, they invited me to sit down on Friday with the founders (Devin and Amit, you guys rock!) and the production team on the show (Carlos and Quincy – you have skills!).
Thursday night I updated Mariko, my co-host on the show via Facebook. She was so excited she said she has to come over for that – and booked a flight for the early next morning.
Nice! Making moves on a whim!
So I adjusted some of my Friday morning plans and met her at the Hong Kong airport express. Prepped more for the meetings and got each other super excited.
Wow, it is happening – Ecommerce Gladiator is getting to the next level. In the meeting we re-configured the outline of the show and breaking it up into more segments.
May not use a studio audience anymore, and will do it in a Hong Kong recording studio instead. I have no clue about TV shows, but am so fortunate to be linked up with Mariko and Shadow Factory – who have a ton of experience and network in the industry.
Seems Ecommerce Gladiator is moving to Hong Kong for its production. Mariko is based in Vietnam, but totally down to fly in to HK for each month’s recording. Want to keep the show going monthly, which actually seems like a ton of work. Seems like 2 weeks to prepare for the show, record it, then 2 weeks to edit and produce it.
A ton of improvements to be made on the first episode – which we are calling the pilot episode.
But this is what I have been saying lately on my video blog – just gotta put yourself out there.

Ejected: Kicked Out at 6pm – No Visitors Allowed Due to Virus