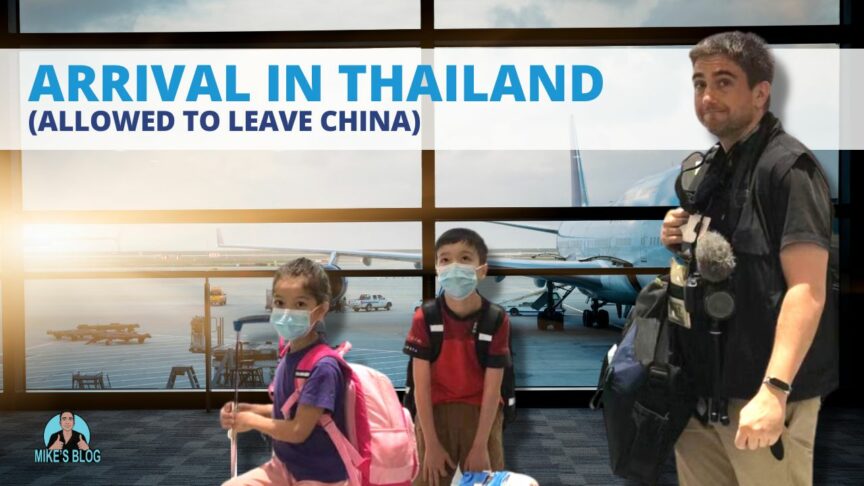 Typing this up from a hotel lobby near the BKK airport, on the last day of the month of August 2022 – ready for a fresh start in Chiang Mai for the month of September and the rest of 2022. 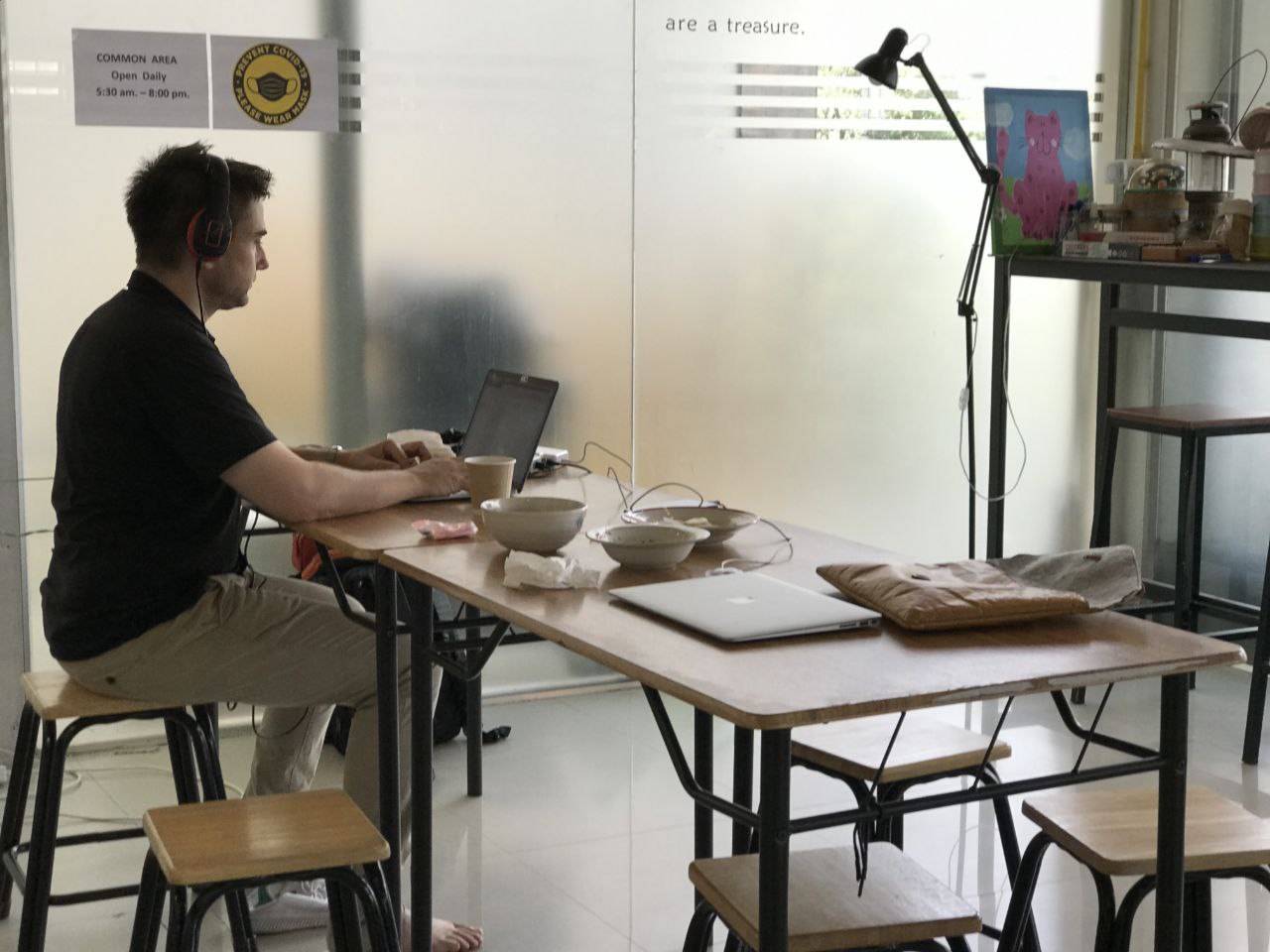 Still don’t want to reveal too much about the process of getting approval for my wife and children to leave China (as the official CN reports will say it is not difficult to leave China) – but all I can say is it felt like a McGyger movie (as Luciano said in a wechat group).

It started on Monday Aug 29 afternoon, Wendy sends me a message – WE NEED TO GO TO HK airport TODAY, not wait for tomorrow.

The latest covid case reports in Shenzhen (with a population of what – like 15 million people) had risen to 11 cases. Schools were getting delayed to start the fall semester, buses, subways, businesses – all closing early or having limited operations.

The city is going to shut down again!

WE GOTTA GO NOW – I agreed.

Wendy mentioned the Shenzhen Bay Border (which we were using to go to the HK airport for our flight) would close at 8pm today. No idea if it would open tomorrow or not. Our flight was for the evening on Tuesday – so seems no way to avoid sleeping at the HK airport. Will get to that later. 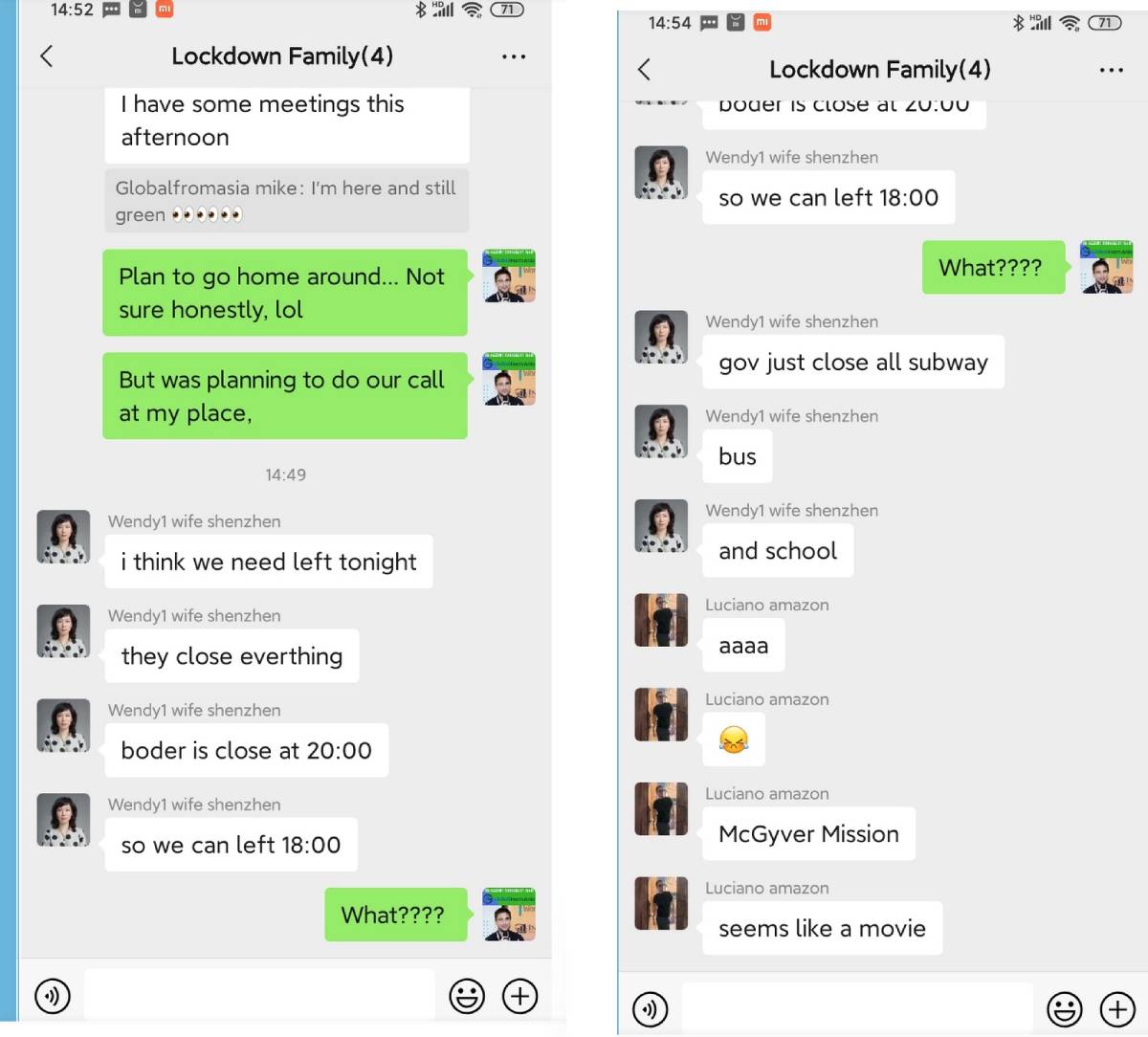 I was at David’s having a meeting on NowShenzhen, and he also agreed it is a good time to go. So he drove me back to my place – and upon arrival Wendy was giving away as many of our belongings away to neighbors as she could.

We have 2 months left on the rental contract, and for sure will not get back the 2 months deposits – so it is a total wash. Can’t carry most things, and it was painful with sorting through and leaving behind most things.

By 4pm Monday – Wendy’s Buddhist community friends , David, the kids, and we went downstairs with a ton of luggage – the max 20 kg x 4 people = 80 kg + probably way too much for carry on. David had his van and we loaded it up.

Arriving at Shenzhen Bay – total ghost town. A handful of cars – about 4 to 6 cars – dropping off people. Paid some local guides a 100 rmb to help carry luggage (mistake!), and said our goodbyes to the crew.

Now – be mentally prepared for piles upon piles of paperwork, QR code scanning, temperature checks. I counted at least 4 times of checkpoints to escape China side. A new kind of app (well mini app in Wechat) was required – all in Chinese – and it was endless amount of data fields of everything, passports, entry, exits, locations, it just didn’t stop asking for data.

At each stage from entering the border building, to the temperature, to the scanning, a few bag checks, I was so full of anxiety. At least no lines. 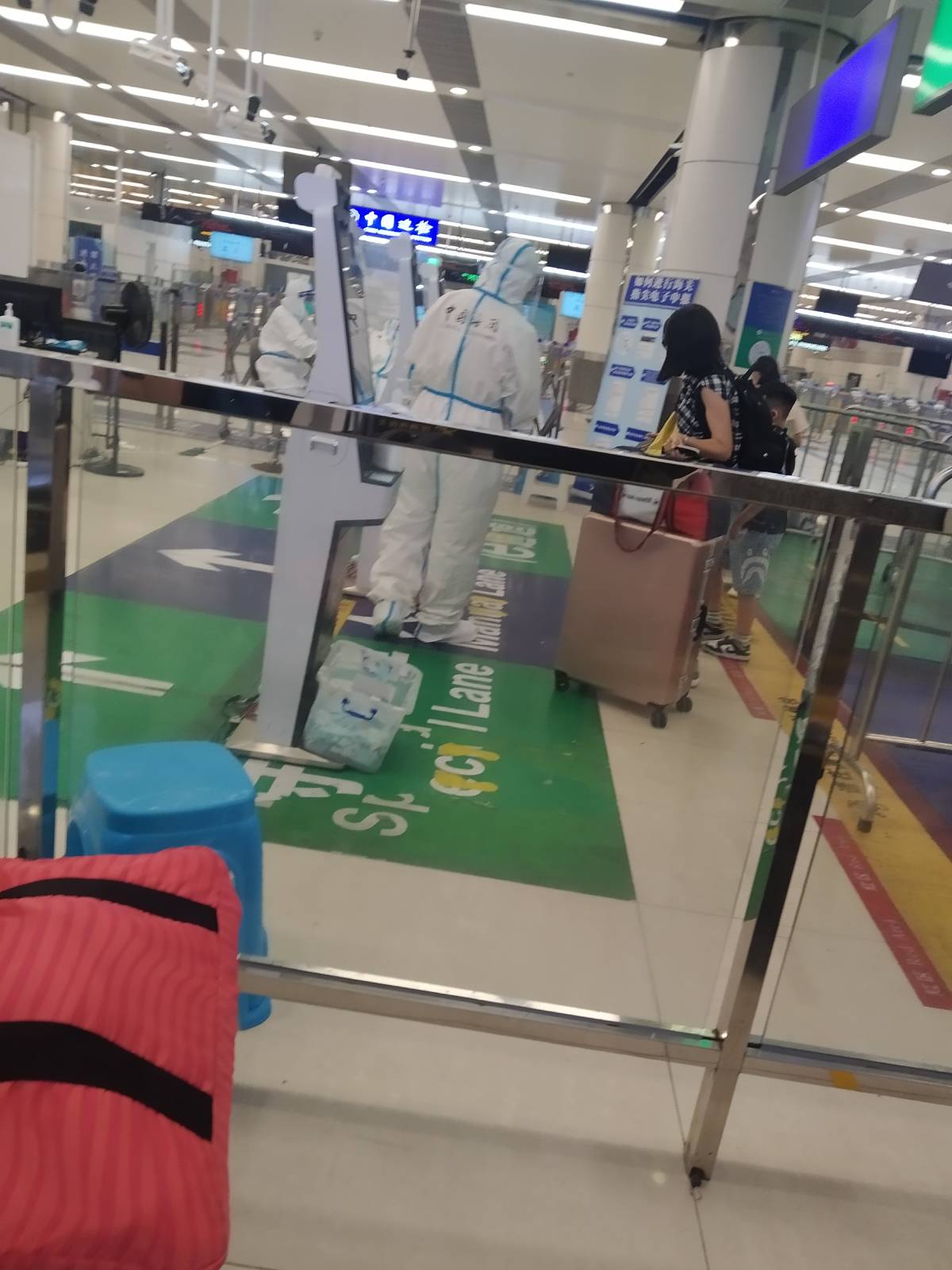 Then the final stage, the exit customs official. Wendy tells me they really dont want children to leave. Not sure exactly the reason, but I think it is because they know kids cost a lot of money and are in school – so they want to keep that money in China. We had to escalate from the border patrol station to a back office, more paperwork, more questions. Fun fact, they consider our children Chinese even though they have US passports because they were born here. That is the main reason for this hassle.

But finally, after questions, and calls, and computer checks, etc – they gave us all our passports and paperwork and phone app screenshots and we could go back to the border patrol station to get our exit stamps.

We made it out!

Entering Hong Kong, they were super helpful at the entry point- even helping fill out the app on our phones, and answering questions. Like night and day!

Many of our friends were worried we would need to get the mandatory 3 day hotel quarantine in Hong Kong (that is the policy now) – but luckily the immigration officers told us so long as we stay in the HK airport we are fine. And we showed our vaccine proof.

Just still so surreal – I was a Foursquare mayor of this border in the past, frequenting it multiple times per week. Now there were only a handful of people crossing, and instead of lines, it was DESKS on the Hong Kong side. They turned the line structure into squares and had medical and immigration officials there to process the mountains of paperwork in order to enter HK.

While a ton of paperwork, a friendly experience, and we were stamped and allowed into Hong Kong. 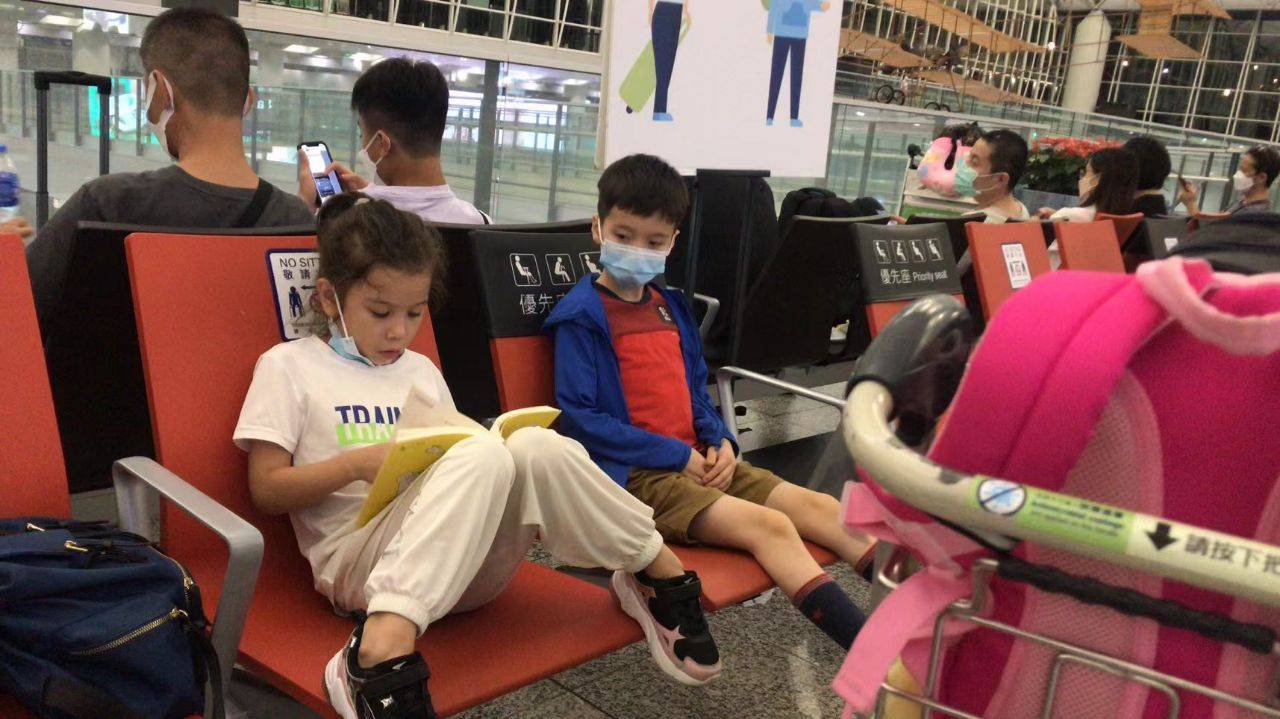 Entering the bus area, so much destruction of business. Whole areas roped off and closed. We saw only about 6 local city buses – no coaches or skylimos anywhere. So we went to the taxi stand, and I realize – I’m a father of 2, with a wife, and a ton of luggage. I’m not just pricing this for 1 person, I need to divide by 4.

So we loaded up and accepted the taxi fare of 450 HKD. Loading up the luggage – the trunk had to be “elastic band closed” and still not enough space for all our bags. The horde of taxi drivers told us we need to get 2 taxis.

No – we will make this work – I insisted. And started squeezing in luggage in the back seat. Lol, the kids didn’t have much footroom, and my front seat area was loaded up on my lap – but we got it all in 1 taxi.

After the 30-ish minute drive, and not having any HKD – he accepted a 50 USD dollar note (luckily I keep various currencies in my travel bag) and we entered the airport.

Timecheck, I’d say about 8 or 9pm at this time, Monday. The security allowed us in no issues, and I counted about 15 flights on the departure list (1 and a half screens from the normal 5 or 6 full screens in the past).

Still just in shock how the airport was mostly empty. We picked a HK cafe over McDonalds, and found a bench to sit in. (We couldn’t enter the airport restaurant seating area as we didn’t have a HK mobile app QR code thingie). 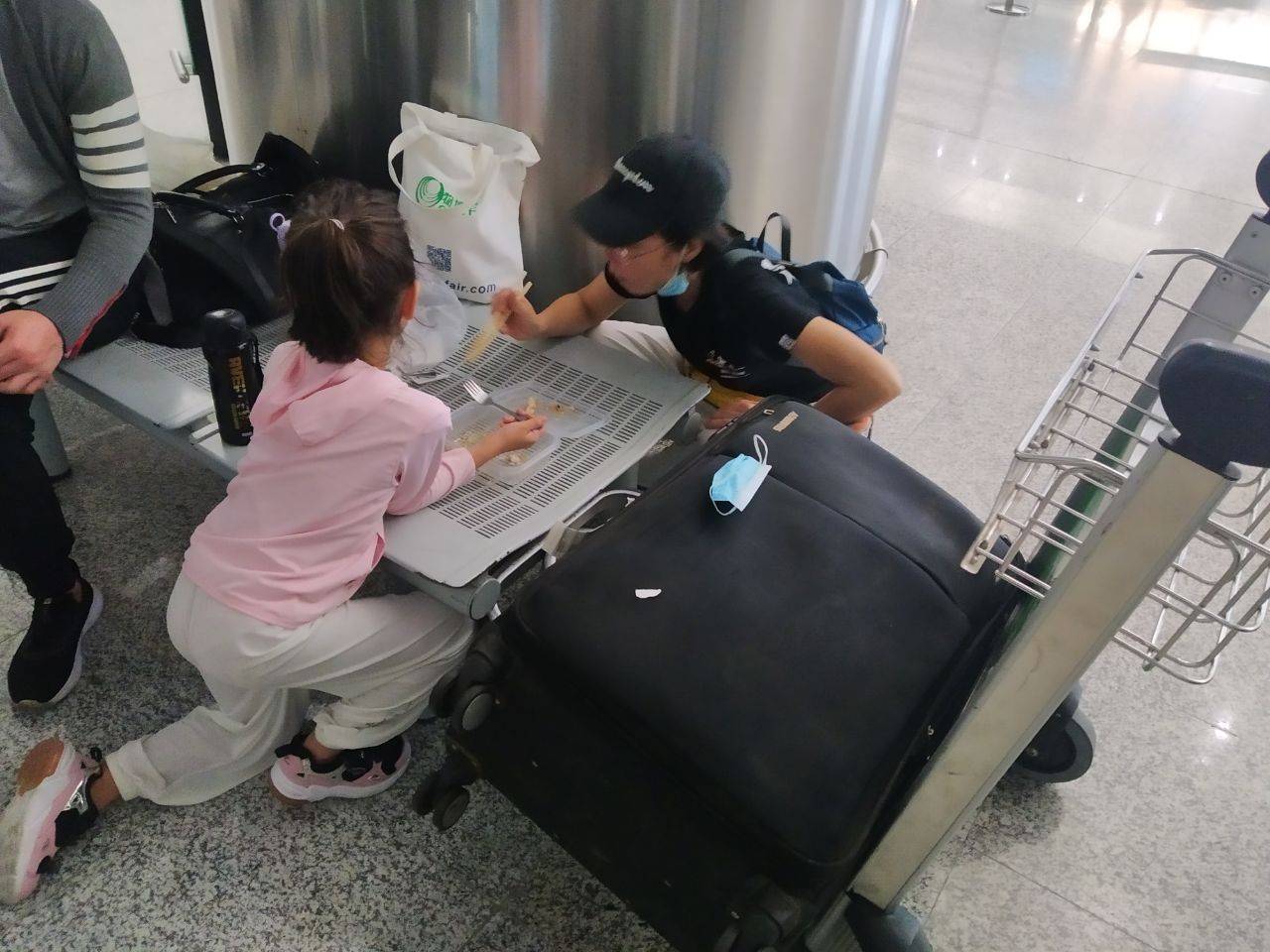 It was a relief though, as exhausted as I was – we were allowed to exit China. And the reports from friends and the NowShenzhen Wechat account said – the Futian and Luoho districts were entering full lockdown until Sept 1.

We made the right call to leave.

Still not sure if we waited until Tuesday we’d be here or not. So many compounds under total lockdown, some under partial. Transportation closed and limited all over Shenzhen.

So walking around the non-checked in area of the airport, we found some open benches to semi-lay down in. I remembered the Regal hotel (I did a blog and video on it here https://www.globalfromasia.com/hongkongairport/hotels/ ) which is connected to the airport.

Wandering over there on my own – maybe we could stay there to get some higher quality rest.

To enter that part of the hotel, the security told me – I’d need to enter a 3 day quarantine. So sorry – not gonna stick around HK 3 more days to stay 1 night in a hotel. Bench/floor in HK airport it is. 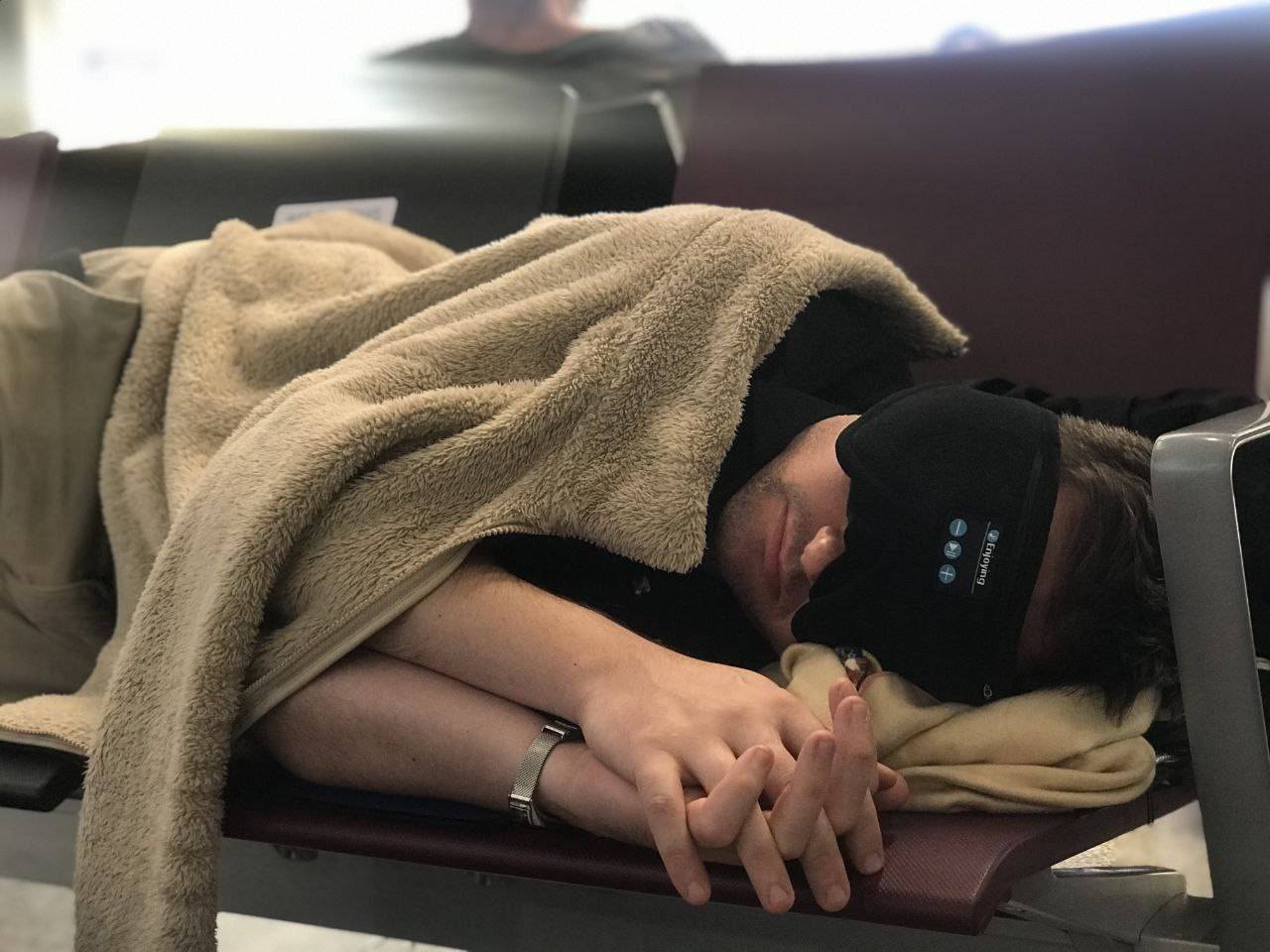 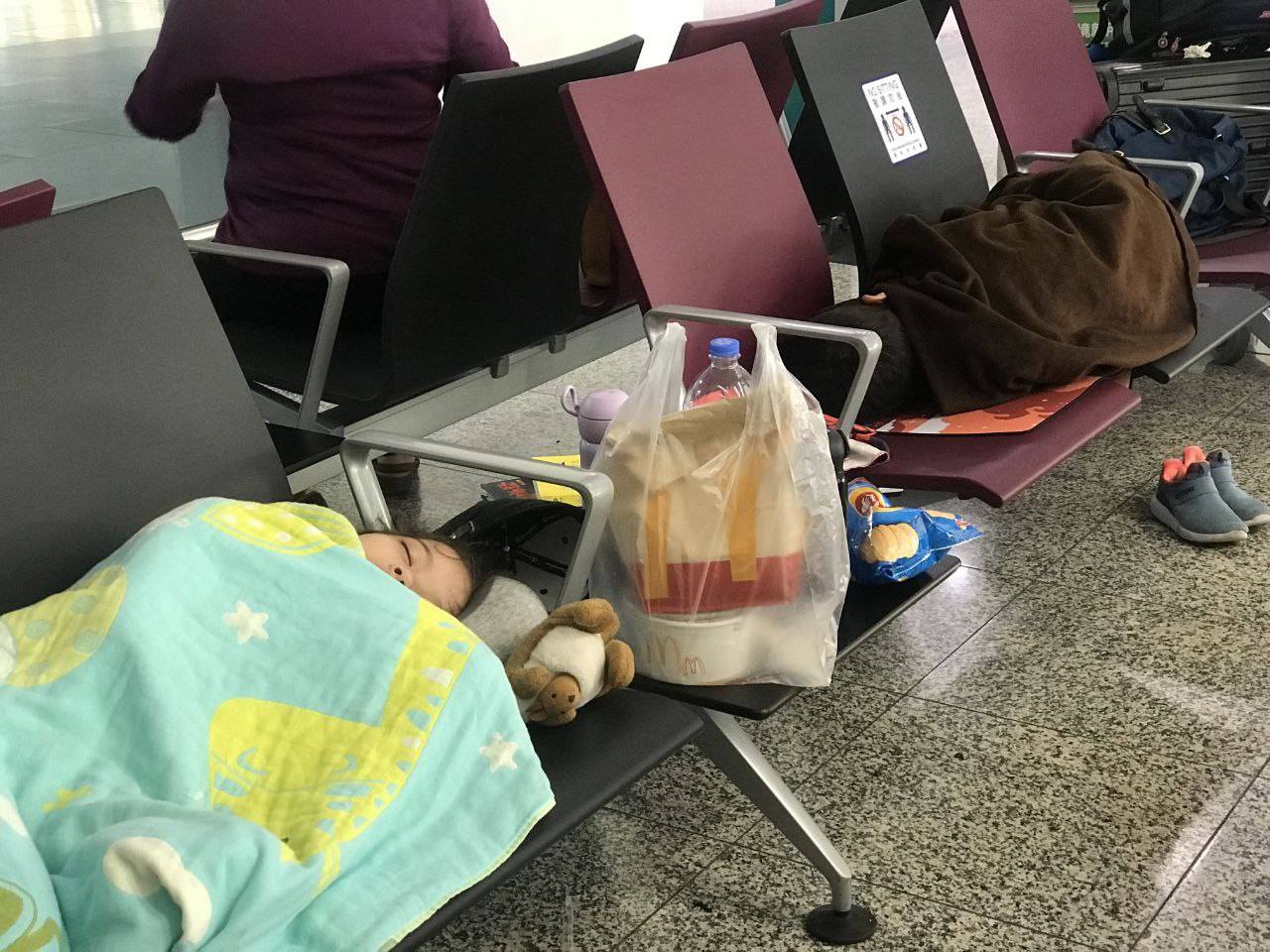 Waking up (well on and off all night) – 8am on Tuesday the testing facilities would open. We were getting mixed signals from various people at the airport if we needed to have a test at the airport. It seems mostly that it was the policy of the country you were flying to. The research showed we needed a 72 hour negative covid test result – and for sure I and the family had that (we had daily tests for months now).

Then we tried to move our Tuesday night flight up to Tuesday morning – there was a flight 1145am depart (instead of our 715pm depart). But nope, basically – not possible to change your flight time. They made me feel like it was unheard of – but in the past (I guess “pre-covid”) I remember sometimes they airlines would have empty seats on an earlier flight and let us move our time up.

Nope, time to spend the full Tuesday in HK airport. Did some calls, free wifi everywhere, caught up on urgent matters. But seriously brain dead from the fearful Monday night China customs escape act, and the sleeping on a bench in an airport.

Once we checked in at 4pm Tuesday, it was smooth sailing. We boarded on time, landed in Bkk around 930pm local time – and stayed over at a hotel airport.

Later this afternoon will fly from BKK to Chiang Mai, and look forward to sorting things out.

But we made it – Wendy said – the wish I had has come true.

Time for a new chapter. Well, also gotta fcollcet all our belongings and our car taht has been here since leaving in December 2019.

Coronavirus: Concerned For My Family in China