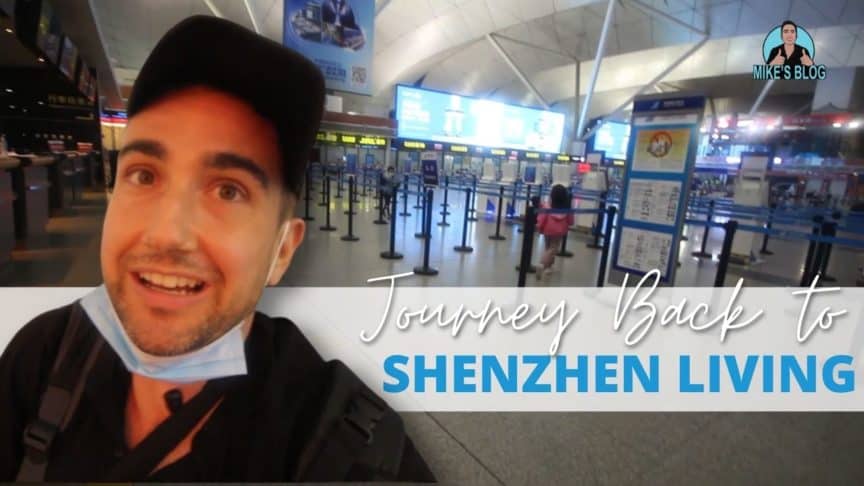 It’s just like those mobster movies I used to watch as a kid. They always say, “Just when I thought I was out, they pull me back in.”

This is definitely the case for business and life in China, but it especially applies for the city of Shenzhen.

After about a year and a half in Shenyang, China (a northeast China city, my wife’s hometown), the family and I flew down to Shenzhen on Thursday night, Aug 5, 2021.

If I thought traveling alone in China was a challenge, try traveling with a wife and 2 kids (7 and 5). Well, the wife is definitely an asset, but the kids are a tricky parameter in the already complex and unpredictable traveling journey in China.

This is no exaggeration when I say WOW! The airport was EMPTY! It was as empty as I remembered when I returned to China back in March 2020. In the massive check-in area, I could clearly count 20 or so people. It still feels so surreal to see massive airports empty.

The bonus though is that there is no line for check-ins! After loading up our 80 KG limit of checked luggage, we then had to do our “green” QR code check-in to prove we have been vaccinated and are not carrying COVID.

As a foreigner, it is never a straightforward procedure. The domestic Chinese system / QR code I scanned didn’t recognize my WeChat / payment password and locked me out. At one point in the 10-15 minute ordeal we even thought I might get stuck in Shenyang. But as always, some new procedure for foreigners to “make it work” was implemented.

Going through security was a breeze. We just went through some extra checking of the luggage, maybe because there was not much else for them to do. Afterwards, it was time to board the plane.

We got on the plane some timearound 8:30 p.m. We got seats way in the back. Miles and I in one row, Wendy and Maggie in another. It is fascinating to see how new and unique airplane seats and functions are to kids. Showing Miles how to turn on and off the overhead lighting, as well as seat reclining was fun.

Takeoff was nice and smooth, but then the plane was loaded up with infants and toddlers. Finally nodded off around midnight and by around 2:30 a.m., we started our decent to Shenzhen.

The rain was strong even in the air. Once we landed on the runway, we had to enter a bus to take us to the terminal and were offered free ponchos. At this moment, it was 3:30 a.m. on a Friday in a typhoon watching over 2 energetic kids. Need I say more?

In the terminal, there was more QR code scanning, forms/database entering, and another mini app for WeChat for this specific airport. We also had a swab test for COVID for the family of 4. Then, we were off.

It was 4:00 a.m. by the time we were loading into a private car that Wendy pre-booked. The kids were still wide awake and full of excitement, but they did doze off a bit in the front seat.

Arriving at my friend Dave’s place (he’s in USA now, so apartment vacant), both elevators were broken. What are the chances! We waited for another 30 min or so for one elevator to be fixed. Finally, at 5:30 a.m., we were in!

I’m writing this up right after my morning meditation and work out. I’m skipping a night’s rest today and going straight into work.

While all this has been exhausting and stressful, I feel that this is the best move we can take right now. Living in Shenyang for a year and a half was enough.

It is time to “spread our wings” in the big city of Shenzhen. Make some deals on the e-commerce/Amazon FBA broker side, as well as factory and ecommerce work in general.

Shenzhen was the city I picked when I first came to China back in 2007, and it is the city I am returning to again in 2021.

Time to make the most of it. Life does truly work in mysterious ways.

Getting Fat in Shanghai Mike’s Blog 039

Hard Work Ethic From My Father