greasing the wheels, making business move forward. How many times do people dispute and squabble over rather small issues. Usually my style is let the other guy win the specific battle, but i will work to win the overall war!
Maybe some specific stories will help explain. Driving across usa with my bud scott katin back in 2003 summer – we took his standard shift pickup truck and it was just the two of us. Now….i do have a drivers license, i have purposely lived in metro cities that don’t require me to drive! Too much hassle…..but in this trip, i had to take the wheel and freshen up on my stick shift skills!
In maybe western Pennsylvania i took the wheel, pretty flat area, not many cars. Coming to Indiana, still flat, but more cars. I have a big tractor trailer truck pull up on me, with a small slope hill. I shift and move, but stall and bump / tap into his truck. 2 or 3 times of the same, i move forward finally. I ask Scott, do i pull over????? “nah, just tapped him”….
Down the road, i see in my rear view that tractor trailer, quickly passing other cars, coming after me! So….i pull over. This guy was pissed! Big beard, beer belly, smelling like gasoline, he starts yelling “what the hell you Connecticut boys doing crashing into me, not even stopping to clear it up with me”. 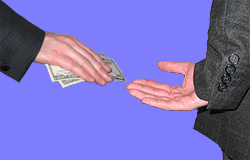 Scott starts returning the yelling, and the trucker says hes got state police on the way to clear it up….
Now, i was silent most of the time, apologizing, but when i heard he called the cops, i asked how much he wanted ($) to make this go away.
I opened my wallet, cant remember the exact amount, but it was around 50usd. I gave it to him, he smiled, said let this be a lesson to ya, called off the cops, and drove away.
Scott was a bit upset with me, saying there wasn’t any damage, and the guy is a jerk, etc.
I just say, why get cops there, questions, and a waste of time? Ill pay some money to skip that bullshit scene.
This is a more clear example of what i mean by paying people off. But some many times in life and in business i feel like i am faced with this choice, of just paying the “disputed charge” and moving forward instead of heaps of time discussing it.

Putting it up on the block, for real this time, newyorkbarstore

Finding Acceptance Being In China, Quality Visit with Mom + Dad