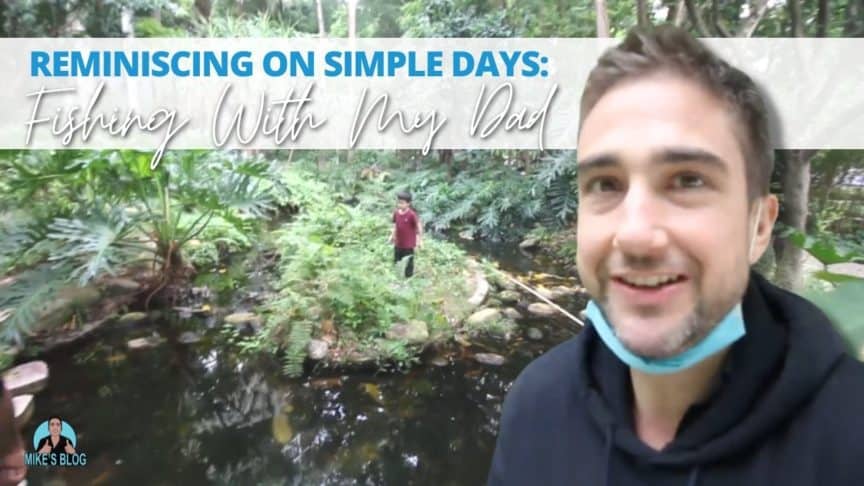 As these extended lockdowns continue, many of us are reflecting on “the good old days”. One thing I look forward to doing with my son and daughter is to take them on a fishing trip.

It was so cold while I was in Shenyang, China that it would have been an ice fishing trip! However, now that I’m down in Shenzhen, there are many more places to go fishing.

I often recall the weekend trips – normally on a Saturday – driving with my dad, sister, and sometimes other friends to go fishing.

Farmington River in Connecticut was a common spot we would go to.

My Uncle Gary would often take me as well.

Fishing was actually not my favorite thing to do. I always found it rather boring to throw a hook into the water and wait for a bite.

It turns out, it was more than that. It was the bonding time. It was the adventure and even the moments when we would prepare together.

I recall heading downstairs to the basement with my dad and looking through all his fishing gear. We would think about which rods to take, which hooks would work, and what other equipment would be best for this specific time of year and conditions.

It was the times we would go and drive through the Autumn hills of Connecticut, with the orange and red tree lines zipping by. There were times when my dad would use his legs to hold the steering wheel and put his hands up to scare us.

It was the times enjoyed talking to random people also fishing beside us, exchanging stories and making sure we had enough space.

Or the times trying finding a “worm” store on the side of the road to buy some nightcrawlers. Getting your hands dirty with worm guts as you hold the worm and slip him on the hook.

The fear maybe that hook you are casting out in the water will hook your earlobe.

The random stories with those around you about really nonsense.

The feeling of a fish biting your hook. Your dad telling you to slowly reel it in. And the slipping away of the fish as you hoist it up in the air – trying to grasp it before it gets away.

The amazing moment of catching the fish, just to let it go free. Just to exercise the ability to catch that fish and see him squirm and be thankful he was released and not eaten.

Taking peanut butter and jelly sandwiches out and some juice boxes for a midday snack or lunch. Or maybe even some soggy French fries from McDonalds on the drive up.

From my experience, the memories that stick the most are those at the end of the day as the sun goes down. You’re trying to make the most of your “numbers” and snag a few more fish. Maybe you can be the one to have the most catches for the day.

The debate on how many fish you REALLY caught, and discussing what counts as a catch (fully in your hands, or those that slip off right as you reel them in).

The sun goes down and you pack up the fishing rods and gear boxes. Load up the trunk, wash your hands off in the river water.

That’s what a day fishing with dad and the family was like.

There are so many things we take for granted. Sometimes, they are things we may not be able to enjoy for a while.

I gifted my buddy Andrew (the fishing guru in our friend circle growing up) a “fishing journal” from Amazon last year. It was something you could use to track the fish you caught for the day and even for tracking over time. It’s a good old-fashioned simple booklet for freestyle notes and tracking.

Do you appreciate the “good old days”?

When will this lockdown be done? Will life go back to “the way it used to be” or will we always be in this lockdown and continue with the “new normal” way of living?

I do look forward to taking my daughter and son on a fishing trip in the great outdoors. I may have to search for what the best fishing poles are and hone my fishing skills – but it will all be worth it.

Who knows? We might just use fish finders to find those fish right away.

I look forward to seeing my children’s eyes widening as they see a fish biting on their line or hook (can’t recall the terminology anymore) as well as the anticipation of whether they reel it in successfully or not.

This is what makes life worth living.

Missing my mom, dad, sister, uncles and family back stateside. The thought of not being able to see them for an extended period of time due to the lockdowns and travel bans is a challenge.

We need to stay positive and upbeat. It is the only way.

Look forward to posting a blog here when we do take the kids out for a fishing trip.

How Is Working Online?

Visa Runs / Extensions / Go Back Where You Belong?