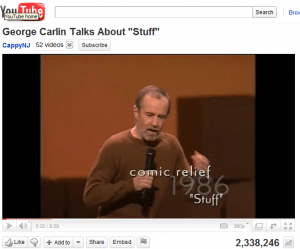 Always liked George Carlin stand up…remember listening to it with my hometown friends Andrew Moran and others in grade school (yea, weird a little bit to listen to this stuff at such a young age). Listened a few times to this video “stuff” lately, while in USA (when re-uniting with Andrew, Scott, and others) as well as over here in Asia again. Today, this morning, having coffee with Marshall and Marie talking about pressures Americans make for themselves – I referred them to this video.

But really, this video is so true…..again I’ll generalize “us Americans”, but the average American is brought up to believe their life is measured by the size of their bank account, the neighborhood they buy their house in, the style of their car. A year or so ago I blogged about the saying from Will Smith – Too many people spend money they haven’t yet earned to buy things they don’t need to impress people they don’t like” and damn, isn’t that the truth.

Think back to those horrible high school days, those peer pressures to buy the newest fashions, to fit in with the crowd, to have designer name brand clothing. And if you didn’t do this, you were normally exiled as a nerd, or laughed at, or just not put on the same level as the cool people who did follow the trends.

Hopefully, as we grow and mature, we realize this is purely silly nonsense, and its not what on the outside that matters, it is what inside that counts.

Yet we get sucked into the American society way of thinking…that we have to spend money! That we need to consume. That we need to prove our worth to others by collecting more clothes, cars, jewels, to show we made it as a human being.

Sure, maybe my years in Asia transitioned me to some extremist/ minimalist that maybe I have lost touch with my daily life as an American and am going to turn my back on normal living for some strange new lifestyle.

But really, life is meant to be lived. And I don’t think living is about accumulating STUFF.

Guess I’ll keep up this George Carlin “extremist” theory and keep on living life as a minimalist, though he is no longer with us on this Earth today, I think he would consider himself part of this minimalist movement I am seeing in some people these days.

so yea, lets get this going!

Getting Used to The Non-Schedule Lifestyle

Funny Idea of Management Structure – But I Disagree

one thing i wont miss the nyc subways